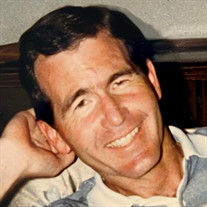 D. Steve Dennis, Ph.D., age 74, of St. Augustine, passed away peacefully on Sunday, October 3, 2021, at his home with his family by his side. Born on May 28, 1947, to Don and Irene Dennis, Steve grew up in Denver, Colorado. He attended Colorado State University, graduating with a bachelor’s degree (with distinction) in fishery biology and a master’s degree in zoology. He earned his Ph.D. in entomology from the University of Wyoming. For many years, Steve worked as an Environmental Scientist for an engineering/construction company. Much of his work was international. Steve’s work took him to countries on every continent except South America. He traveled to most US states and several countries, including Siberia, Ukraine, Mongolia, Antarctica, Republic of the Congo, England, and Turkey. While working in engineering/construction and since his retirement, Steve continued the entomological research he began during his Ph.D. program. He published more than fifty papers in scientific journals, mostly about robber flies. In February, the St. John’s River Water Management District published an article about Steve’s research in the Moses Creek Conservation Area. That research resulted in about twenty publications. Steve became a resident of St. Augustine in 2006. He was an active member of Crescent Beach Baptist Church, where he joyfully served as a deacon. More than anything, Steve was a loving husband, son, father, grandfather, and friend to many. He will be deeply missed. Steve was preceded in death by his father. He is survived by his wife, daughter, mother, sister, grandchildren, in-laws, and several nieces and nephews. A memorial service will be held at 6PM on Sunday, October 17, 2021, at Crescent Beach Baptist Church with Dr. David Beauchamp officiating. In lieu of flowers, donations in Steve’s memory can be made to: Crescent Beach Baptist Church building fund or the Lottie Moon offering. St. Johns Family Funeral Home is in charge of arrangements.

D. Steve Dennis, Ph.D., age 74, of St. Augustine, passed away peacefully on Sunday, October 3, 2021, at his home with his family by his side. Born on May 28, 1947, to Don and Irene Dennis, Steve grew up in Denver, Colorado. He attended Colorado... View Obituary & Service Information

The family of D. Steven Dennis, Ph.D. created this Life Tributes page to make it easy to share your memories.

Send flowers to the Dennis family.