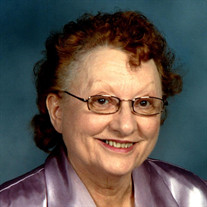 Cora Elizabeth McQuerry Scales, age 95, departed this life on May 25, 2022, at her home in St. Augustine, Florida. Cora Elizabeth and her twin sister, Jane Margaret, were born on February 27, 1927, in the family’s farmhouse, east of Blythdale, Missouri. They were delivered by the local county doctor, Dr. Watkins Broyles. Her twin sister departed this life on February 28, 1927. Elizabeth was the youngest child of James Madison and Lois Harrison McQuerry. Elizabeth had an older brother, Wayne Harrison McQuerry, whom she adored and loved. He was always there to help and support her, whatever problem arose. Elizabeth was born on the farm and spent her childhood days there with her parents and her brother, Wayne. She attended Donaby Country School and graduated from Blythdale High School in 1945. While at home in her youth, she loved to ride five-gaited American Saddlebred horses. She started riding when she was five years old. She spent her summers riding her horses and playing the piano. After she graduated high school, she pursued further studies, graduating in 1950 from Northwest Missouri University in Maryville with a Bachelor of Education degree. She then attended Indiana University in Bloomington, where she received her Master’s Degree in Education in 1956. Most of her years of teaching were in the Indianapolis public school system. She dearly loved teaching and working with these young children. It was while she was teaching in Indianapolis that she met her true love, Waldo Scales, who was attending dental school at Indiana University. On July 23, 1957, Cora Elizabeth McQuerry and Dr. Waldo Schaffer Scales were married in the Plainfield Methodist Church, Plainfield Indiana. To this union three children were born: sons William Waldo Scales and James Raymond Scales, and a daughter, Jane Michele Scales (Skinner). The couple was married for 45 years. In the spring of 1958, Elizabeth accompanied her husband as he entered the U.S. Army Dental Corps. When he was stationed at Fort Campbell, Kentucky, Elizabeth taught school on the base. This was a base where paratroopers were in training. As Elizabeth drove to school on the base in the morning, she would watch the parachutes fall from the sky. She always looked for General Westmoreland, as he always had a white parachute-whereas all of the others were grey. This was always a thrill, and she so enjoyed seeing this first thing in the morning. She also enjoyed teaching the children on base, as they came from varied backgrounds. Elizabeth was a devoted wife, a loving mother and grandmother. For many years she worked with her husband, Dr. Waldo Scales, in his dental office. They both loved the work and their patients very much. They also loved to travel, and did so for many years until health problems occurred with Waldo. They were very devoted to their children and to each other. They created an atmosphere of inspiration, praise and presence for their children, always interested in their accomplishments and endeavors. Elizabeth became a member of the Beta Sigma Phi sorority in Indianapolis in 1957. She transferred and reactivated her membership with the Laureate Delta Phi chapter after the death of her husband. She really enjoyed the fellowship, support and close friendships she had with her sorority sisters. Elizabeth, a Christian woman, was raised in the Methodist faith. She attended Blythdale Methodist Church, where she was baptized as a very young child (she was on “Cradle Roll” at the age of two). After she and her husband moved to St. Augustine, they were members of Shores United Methodist Church until their deaths. She is preceded in death by her husband, Dr. Waldo Schaffer Scales, and her brother, Wayne Harrison McQuerry. She is survived by her son, William Waldo Scales (Cindy) and granddaughter, Samantha Elizabeth; son, James Raymond Scales (Jill DeVane), granddaughter, Michaela Scales Weatherman (Cameron), grandson, Harrison Wyatt Scales, and great-granddaughter, Timber Grey Weatherman; daughter, Jane Michele Scales Skinner (Jeffrey), grandsons Noah Lee Bullock, Jacob Alan Skinner, Ryan Jeffrey, and granddaughter, Sarah Michelle Skinner. She is also survived by a sister-in-law, Ruth C. McQuerry, of Orange California, and many nieces and nephews. Services will be held at 10 am on Saturday, June 4, 2022, at St. Johns Family Funeral Home. Interment will follow at Craig Memorial Park. A visitation will be held from 5 to 7 pm on Friday, June 3, 2022, at St. Johns Family Funeral Home. Those unable to attend can view the service live streamed at https://iframe.dacast.com/live/2a7a09ae1c0559a83ef537e05e6a14a6/2aae7d5f-98fd-a9e6-32a7-b774547cf42c Flowers are gratefully accepted, or donations can be made in her memory to the Shores United Methodist Church or charity of their choice. St. Johns Family Funeral Home is in charge of the arrangements.

Cora Elizabeth McQuerry Scales, age 95, departed this life on May 25, 2022, at her home in St. Augustine, Florida. Cora Elizabeth and her twin sister, Jane Margaret, were born on February 27, 1927, in the family&#8217;s farmhouse, east of Blythdale,... View Obituary & Service Information

The family of Cora Elizabeth Scales created this Life Tributes page to make it easy to share your memories.

Send flowers to the Scales family.