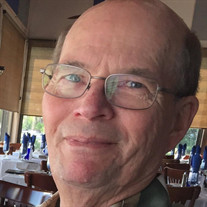 Charles Raymond Jackman, Jr, age 76, passed away on June 08, 2022 at his home in St. Augustine. Charles was born on March 23, 1946 in San Diego, CA to parents Charles Raymond and Ida Mae Pearson Jackman. Growing up he lived in Kansas, Texas, Florida, and California following the career of his father who worked in the aerospace industry. Known to his friends as "Chuck" and "Butch" by his family, he was a graduate of Salina (Kansas) High School. He later met the love of his life, Mary Phillips, while attending college in Cocoa, Florida. Chuck married Mary on August 13, 1966 and started their married life in Cocoa. In 1970, he moved to Gainesville and went to work for the Beechnut Baby Food Company and in 1974 he moved to Jacksonville to begin what would become a successful 30-year career with the RJ Reynolds Tobacco Company. Throughout these years and into retirement Chuck enjoyed the lifelong friendships he made with his RJR family. More than anything he was a dedicated family man who was very thoughtful and always concerned about the needs of others. He was a deep thinker about the world and politics. He enjoyed golfing, fishing, woodworking, and reading. Chuck was dearly loved by his family and friends, and he will be deeply missed. He was preceded in death by his parents, Ida and Charles Jackman. Charles is survived by his wife of 56 years, Mary P. Jackman of St. Augustine; daughters, Lisa Rodriguez and husband Yan of Atlanta, Jenny Begley and husband Geoff of Jacksonville Beach; son Michael Jackman and wife Melissa of Tallahassee; sisters, Jackie Chasteen and husband A.W. of Titusville, Terry Ann Dufresne and husband John of Orlando; and grandchildren, Nicholas Rodriguez and wife Hannah, Daniel Rodriguez, Sophia Begley, Clara Begley, Leo Begley and David Begley. A celebration of Chuck's life will be held at 2 p.m. on Saturday, June 25, 2022 at St. Johns Family Funeral Home. For those unable to attend, you may watch a live stream by clicking on this link: https://iframe.dacast.com/live/2a7a09ae1c0559a83ef537e05e6a14a6/2aae7d5f-98fd-a9e6-32a7-b774547cf42c. In lieu of flowers, donations in his memory can be made to the National MS Society. Online condolences can be made at https://www.stjohnsfamilyfuneralhome.com/. Funeral arrangements were trusted to St. Johns Family Funeral Home.

The family of Charles Raymond "Chuck" Jackman, Jr. created this Life Tributes page to make it easy to share your memories.