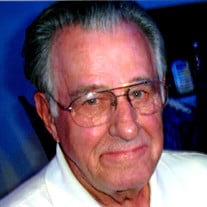 Our Dad, Carroll Gast, moved to heaven on Sunday, February 14th, 2021 after a struggle with pneumonia in Baptist South hospital at the age of 85. Carroll was born on January 31, 1936 in Valparaiso, Indiana and was the last member of the Arthur W. and Lilly P. Gast family, which included brothers Paul, Robert and David and sister Ruth. All were born and raised in Valparaiso on the farm and all are deceased. His senior year included his being elected President of his Senior class and he continued his educational goals by enrolling in the College of Engineering at Valparaiso University to study Civil Engineering. After two years, he was forced to drop out of school due to lack of personal funds to continue. He immediately enlisted in the U. S. Navy and served active duty in the SeaBees branch as he had requested. His military tours took him to North Africa and to Puerto Rico—WARM weather! His active duty extended for two years and he was able to compile sufficient funds (without playing poker or craps) to continue his educational goal. Carroll reenrolled at Valparaiso University and graduated in 1960 with a BS degree in Civil Engineering. He was honored at Purdue University by the American Society of Civil Engineers in his senior year as one of two Outstanding Engineers in the Student Chapters of the ASCE among 3 states. Carroll and Joan (Wittenberg, a Valparaiso girl) Gast, his wonderful wife, were married in Valparaiso on August 13, 1960. After three cold winter years in northern Indiana and the birth of two children, he accepted a position at the Cape Canaveral AFS in warm Florida. Two more children soon arrived. After thirty-five years, including three years as the Field Office manager for Planning Research Corporation at Vandenberg AFB during the activation phase of the planned U.S. Air Force Shuttle program, he retired from United Space Alliance on February 6, 1998. Memorable times included cruises to Alaska, Nova Scotia and most of the Caribbean Islands and separate bus tours to the New England states, the Mid -Western states, New York state, Holland and Ireland. Most memorable was their Fiftieth Wedding Anniversary with the entire family in St. Augustine. Other family highlights included his role as manager of daughter Lisa’s North Merritt Island Lassie League softball teams and as manager of sons Larry, Darrell and David’s North Merritt Island Little League and Babe Ruth baseball teams. Carroll served as the N.M.I.L.L. president in 1973. Carroll enjoyed his home and membership at the Lacita Country Club in Titusville, playing golf, dining with family and friends and attending special events for nearly thirty years. Survivors include Joan, his wife of 60 years; daughter, Lisa; sons, Larry, Darrell (wife Kelly) and David (wife Laurie); seven wonderful grandchildren and eight nieces and nephews. Family receiving friends and guests for visitations will be from 10:00 to 11:00 am on Saturday morning, March 6th at Our Lady of Good Counsel Catholic Church on Hwy. 16 in World Golf Village, FL and a funeral Mass to follow at 11 am. Monetary donations may be made to the American Cancer Society, the American Diabetes Assn., or Hospice of St. Francis and would be deeply appreciated. St. Johns Family Funeral Home is in charge of arrangements.

Our Dad, Carroll Gast, moved to heaven on Sunday, February 14th, 2021 after a struggle with pneumonia in Baptist South hospital at the age of 85. Carroll was born on January 31, 1936 in Valparaiso, Indiana and was the last member of the Arthur... View Obituary & Service Information

The family of Carroll Lawrence Gast created this Life Tributes page to make it easy to share your memories.

Send flowers to the Gast family.