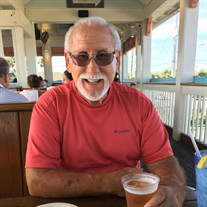 Carl Roy “Zeke” Ruzicka, age 74, of St. Augustine, Florida passed away on April 18, 2021 at the Bailey Family Center for Caring of natural causes. He had been visited and comforted by his wife and son. Zeke was born and lived most of his life in Columbus, Ohio. After graduating from Pleasant View High School, Zeke began working in sales. His large stature and personality shined as he worked with his customers. He owned his own business in copier and office machines, bookending this career in residential real estate. His integrity, warmth, and charisma made most of his customers close friends. The consummate “west sider”, most of his family and friends described him as bigger than life. His family came first, and he took considerable pride in being both a father and coach to younger people. This was his greatest joy. An avid sports fan and participant, he became the national champion in the Master’s Division Bench Press at age 49. In 2008, Zeke moved to St. Augustine and started his own business with Fish Window Cleaning. Soon thereafter, he met his wife, and together they built their dream home surrounded by nature and water. He loved spending time at the beach, fishing, and was an avid reader in his later years. He is preceded in death by his father, Carl Ruzicka; his mother, Lois Ruzicka; and his sister, Karen Ruzicka. He is survived by his wife, Donna Ruzicka of St. Augustine; his son, Jason Ruzicka of Spokane, Washington; and his sister, Sandy Wooldridge, of Tuscon, Arizona; as well as his wife’s children, Josh Behrens of Austin, Texas and Heather Behrens, of Urbana, Ohio. A formal service will not be held. We ask that you please celebrate his life with your loved ones. Toast and honor the big guy that we all loved. The family requests that should you choose, a donation be made to the charity of your choice. St. Johns Family Funeral Home is in charge of arrangements.

Carl Roy &#8220;Zeke&#8221; Ruzicka, age 74, of St. Augustine, Florida passed away on April 18, 2021 at the Bailey Family Center for Caring of natural causes. He had been visited and comforted by his wife and son. Zeke was born and lived most... View Obituary & Service Information

The family of Carl Roy Ruzicka created this Life Tributes page to make it easy to share your memories.

Send flowers to the Ruzicka family.