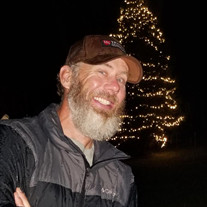 Brian Racine passed away unexpectedly on January 1, 2021. Brian was born in Concord, NH on May 21, 1976, grew up in Nashua, NH, and graduated from Dunedin High School in Dunedin, FL. He began his 23-year career in the US Navy in November of 1994. During his time in the Navy, he was assigned to the USS Theodore Roosevelt where he advanced to Third Class and Second-Class Petty Officer working on the hanger bay as an aircraft director. He completed three deployments before being assigned to the Naval Station at Mayport. After completing ABH “C” School, Brian returned to the USS Theodore Roosevelt where he served as Fly Three Petty Officer and Crash and Salvage LPO, advancing to First Class Petty Officer. In March 2007, he completed Journeyman Instructor Training School and was assigned to Farrier Fire Fighting School at the Center for Naval Engineering. While there he earned the prestigious Master Training Specialist designation. After advancing to Chief Petty Officer, he reported to the USS Dwight D. Eisenhower in November 2011, participating in combat deployments in support of Operation Iraqi Freedom and Operation Enduring Freedom. Brian advanced to Senior Chief Petty Officer and reported to Littoral Combat Ship Squadron in Mayport Florida. He retired July 13 after 23 years of service during which he earned three Navy Commendations and three Navy Achievement medals. While his allegiance to his country was an integral part of his life, Brian found his true joy in family. He married the love of his life, Lerici, on November 11, 2000. Together they had two children, Trevor (16) and Mariana (12) and have made their home in St. Johns, Florida. Brian shared his love for the outdoors with them, spending their time fishing, hunting, boating and camping. Many of the people Brian worked with have credited him for showing them how family comes first, and that nature is the place to find God’s peace in the darkest of times. Brian also served as Chair of the Trustees Committee and a member of the Administrative Council at River of Life United Methodist Church, and was the Assistant Scout Master and Charter Representative for Troop 280 in St. Johns. He took great pride in recently helping his son complete his Eagle Scout Project. He encouraged his children’s love of baseball and horseback riding and was their biggest cheerleader on the sidelines (well, maybe second only to their mom). He filled their world with adventure and a zest for life, and both of his children share his love for the water and the outdoors. Brian leaves behind his parents, Robert and Nancy Racine of Seven Lakes, NC, who have always taken great pride in his accomplishments in both his naval career and his personal life, two sisters, Leslie Racine Vazquez of Providence, RI, and Amie Collins of West End NC. He also leaves behind a nephew, Rowan, and two nieces, Claire and Sophie who will miss his frequent visits, his infectious joy, and even his crazy beard! Brian will be remembered as having a true love of country, but more importantly as knowing that family comes first. His greatest happiness was found in building a life for his wife and children, and he will be remembered best as the guy with a sharp wit, a quick laugh, spending the day on the boat, fishing pole in hand, family by his side, surrounded by the things he loved most in this world. A Celebration of Brian’s life will be 11 a.m., Tuesday, January 12, 2021 at the River of Life United Methodist Church with Pastor Perri Martin officiating. "The service is being held outside for social distancing purposes. If you plan to attend, please bring camping or lawn chairs to sit on. Dress comfortable “like Brian would”. Brian will be laid to rest at Jacksonville National Cemetery. In lieu of flowers, please consider a donation to: Kids Fishing Foundation- kidsfishingfoundation.com, or the Gary Sinise Foundation- garysinesefoundation.org

Brian Racine passed away unexpectedly on January 1, 2021. Brian was born in Concord, NH on May 21, 1976, grew up in Nashua, NH, and graduated from Dunedin High School in Dunedin, FL. He began his 23-year career in the US Navy in November of... View Obituary & Service Information

The family of Brian Andrew Racine created this Life Tributes page to make it easy to share your memories.

Send flowers to the Racine family.