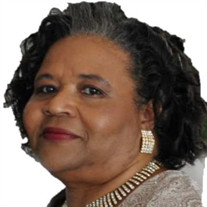 Brenda Joyce Mapp, 72, St. Augustine, formerly of Oakland, CA, died peacefully at her residence on August 11, 2021. She was the daughter of the late Roddie and Mildred Proctor. She was one of six siblings, all who have preceded her in death except her sister Cathy Harris. Brenda accepted Christ at an early age at North Oakland Missionary Baptist Church. She graduated from McClymonds High School in Oakland, California. While attending the University of California, she met and married Clarence Mapp. To this union their only child Timonthy was born. She continued attending the University of California, where she received a degree in Business Administration with a minor in Management. She went to work at Hewlett Packard and progressed up the ranks to Manager of a large staff. It was during this time that she raised her youngest sister’s son Erik Proctor. Tim and Erik were the joy of her life. Brenda loved to read, learn, and help people. She went into the Cal State Hayward Teaching Program and earned her Teaching Credential with Spanish as a second language. She worked at Horace Mann Elementary School for over 20 years. She loved teaching and truly enjoyed her students. She helped and influenced many students and mentored numerous teachers. She was excited to retire, and moved to Florida in 2018 to be near her son, Timonthy and grandkids Tahlia and Timonthy II, whom she adored. Brenda attended Impact Church with her Florida family and during the pandemic joined online and watched services every Sunday. Brenda celebrated her 72nd birthday on August 1st with her son Timonthy and his wife Tiffany, the grandkids, family friends, and her bonus son Erik, who flew in from San Francisco to surprise her. Brenda was a God fearing woman, who loved people, football, food, reading, and cooking for her grandkids. She had many close friends and family who will greatly miss her. She is survived by her son, Timonthy Mapp, St. Augustine; bonus son, Erik Proctor, San Francisco; sister, Cathy Harris, California; and two grandchildren, Timonthy Mapp II, and Tahlia Mapp; a host of nieces and nephews, family and friends. For those unable to attend services will be livestreamed via the following link: https://iframe.dacast.com/b/156599/c/549019 St. Johns Family Funeral Home is in charge of arrangements.

Brenda Joyce Mapp, 72, St. Augustine, formerly of Oakland, CA, died peacefully at her residence on August 11, 2021. She was the daughter of the late Roddie and Mildred Proctor. She was one of six siblings, all who have preceded her in death... View Obituary & Service Information

The family of Brenda Joyce Mapp created this Life Tributes page to make it easy to share your memories.

Send flowers to the Mapp family.