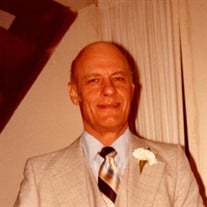 Billie Gene Saylor, 89, formally of St. Charles, MO passed away peacefully August 12, 2021 in Jacksonville, FL where he had resided the last 3 years. Bill was born in Farmington, Mo being the youngest of 5 brothers and an infant sister. He was all conference left guard in football and lettered in track, and according to his year book, quite popular! The 5 Saylor boys seemed to make quite a name for themselves, but we knew that gramma was the boss. After high school, he enlisted in the army. He served six year of active duty during the Korean war and overseas in Germany and Austria. He was wounded three times and received two purple hearts along with several other accommodations and received an honorable discharge as a Master Sargent. During this time, he married Barbara Nickelson and eventually had 5 children. They were married 21 years. Duty seemed to be part of Bill’s make up because, after the service, he joined the St. Louis Police Force. He worked as a patrolman, and a detective in burglary and robbery and juvenile division for 30 years before retiring. In 1978, he married June Grayson and helped to raise her two daughters and grandchildren. They were married for 40 years. While Bill raised his children, he enjoyed vacations to visit relatives across the country, little league baseball games, and developed a passion for golf. He eventually started an annual son/grandson golf tournament. He was a bit of a “gambler” and enjoyed a good poker game, then later competitive Quiddler . He also liked to play Bingo, bowl, fish and work puzzles. He loved country music and liked to sing out when no one was around! There probably wasn’t a time when Bill did not own a dog, Annie, being his smallest little friend. He was preceded in death by his wife, June; son, John Saylor; and two grandsons, Michael Lumley and Scott Applegate. Bill is survived by his daughter Debra Lumley,(Tom)of Jacksonville,FL; his sons Michael Saylor(Karen) of Highland,IL and Steven Saylor of Harrington,DE; his daughter, Sandra Applegate(James) of Ponte Vedra,FL; his stepdaughters Kim York, and Kelly Rector of St. Louis, MO, and 13 grandchildren and 5 great grandchildren. The Memorial Service will be Thursday, August 19 at 6:00pm at Switzerland Community Church, St. Rd 13, Switzerland, FL 32259. St. Johns Family Funeral Home is in charge of arrangements.

Billie Gene Saylor, 89, formally of St. Charles, MO passed away peacefully August 12, 2021 in Jacksonville, FL where he had resided the last 3 years. Bill was born in Farmington, Mo being the youngest of 5 brothers and an infant sister. He was... View Obituary & Service Information

The family of Billie Gene Saylor created this Life Tributes page to make it easy to share your memories.

Send flowers to the Saylor family.