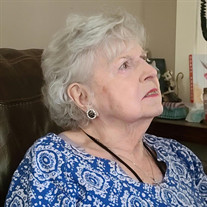 Betty Ann Belflower, Cate, Hodge “Gone but not forgotten, gone but ever here. No longer living in this world, but always and ever near. Death leaves a heartache no one can heal. Love leaves a memory no one can steal.” Betty was born in 1941, in Tifton, Georgia to Myrtle Lee Watson Belflower and George M Belflower. She is a graduate of Robert Lee High School in Jacksonville, Fl. After graduation she worked at the 5 Points Theater. This is where she met a sailor named Gene, who threw a fake spider into her ticket booth. In 1960 they married and had their two girls. While married to Gene she was a homemaker and an active member of the Naval Wives Club. She eventually became the president of the local chapter. She was called “the perfect Naval wife”. They divorced on 1973. Betty began her career with the Professional Staff Office (now UMA) of the Medical University of South Carolina in 1970. She began working in the Department of Surgery. Over the years, she moved up in the organization and eventually became the Reimbursement Manager and retired as such in 2000. In 1987, she married Billy Hodge. They were very involved in their church and served on several committees there. They remained on James Island until after she retired. Once retired, they decided to move to Orange Park, Fl. and build a home. In 2007, Billy died from Alzheimer’s. She was back and forth from Florida to Charleston for a few years, but returned to Florida where she remained until she passed away, peacefully, on May 23, 2022, in Saint Augustine, Fl. Surviving relatives are two daughters, Terri Cate LeBlanc and Pamela Cate Bennett, two grandsons, Wade D Martin (Brooke), A. Shea Hood (Chandler), three great grandchildren, London M Hood, Wilder M Martin, Alexander S Hood and three living sisters Martha B. Yeomans, Carolyn B Moore, and Sylvia B Russell.

Betty Ann Belflower, Cate, Hodge &#8220;Gone but not forgotten, gone but ever here. No longer living in this world, but always and ever near. Death leaves a heartache no one can heal. Love leaves a memory no one can steal.&#8221; Betty was... View Obituary & Service Information

The family of Betty Ann Hodge created this Life Tributes page to make it easy to share your memories.

“Gone but not forgotten, gone...

Send flowers to the Hodge family.