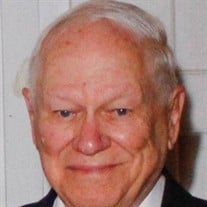 Mr. Barry McKnight “Bud” Harriss, passed away on March 7th, 2022, on his 94th birthday. He was born in Jacksonville, FL to Blanton and Hayden Harriss and was raised by his Aunt “Pete” and Uncle “Pard” in Washington, DC. After graduating from Woodrow Wilson High School, he attended the United States Military Academy at West Point. He graduated with the class of 1951 and went on to serve in the Korean War. He remained in contact with several of his West Point friends and enjoyed returning for their 55th class reunion. After his military service, he worked as a Civil Engineer with several companies including McDonnell Douglas, where he worked on the Mercury mission. He also worked on the Apollo Program with General Electric and retired from St. John’s County. After many moves throughout his lifetime, he and his family have made St. Augustine home for over 35 years. He had a life-long love of trains and built a G-scale train layout in the backyard that was enjoyed by many people over the years. He also belonged to the local Northeast Florida Live Steamers and Railroaders group where he spent countless days tinkering and talking with his train buddies. We are so thankful to this group for providing him a place of belonging and time to enjoy his hobby and stay as active as possible. Bud also enjoyed attending Covenant Presbyterian Church in St. Augustine with his wife and daughter. The family is also very thankful for the care he received at Orange Park Hospital and Community Hospice – Bailey Family Center. The staff members provided exceptional care and compassion for Bud, as well as for his family members and friends. He is survived by his wife of 72 years, Phyllis Harriss, son, William (Scarlet) Harriss, daughters Carolyn (Kevin) Francis and Susan (Jack Boatwright) Harriss; Granddaughters Jennifer (Russell) Nuti and Brett (Benji) Holt; great-grandchildren Christian, Larkin, Tommy, and Harrisson; several in-laws and nieces and nephews, as well as very special “train buddies”. A few words in an obituary hardly paint the picture of “Big Goompa” as we knew him. He will be missed tremendously by his family and friends and the dining room table will never feel quite the same. However, we are extraordinarily grateful that this young boy was able to grow old and experience so much of life – a long marriage, a growing family, so many holidays and birthdays celebrated, a treasured hobby, and, despite struggling with dementia in recent years, time well spent with loved ones. We are most thankful that you are in Heaven and your mind, body, and soul are healed. GO ARMY BEAT NAVY! In lieu of flowers, please consider a donation to the NE FL Live Steamers and Railroaders, 7900 #1 Old Kings Road North, Palm Coast, FL 32137-8285. The family will have a private service at a later date. St Johns Family Funeral Home & Crematory is in charge of arrangements.

The family of Barry McKnight "Bud" Harriss created this Life Tributes page to make it easy to share your memories.