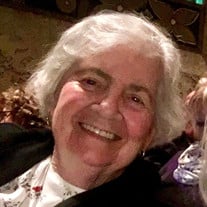 Barbara Ann Enos, age 90, of St. Augustine, Florida, passed away peacefully on February 5, 2022, at the Bailey Center for Caring in St. Augustine. She was born on July 5, 1931, to Theodore Wayne and Mildred (Smith) Fox in Oil City, Pennsylvania. She grew up in Franklin, Pa. and graduated from Oil City High School with the class of 1949. After graduating from nursing school, she married her high school sweetheart Brayton Truman “BT” Enos. She traveled extensively with her husband who was an officer in the US Navy, including duty post in Chincoteague, VA., Kingsville, TX., Maine, Orange Park and Key West, Florida. They returned to Orange Park in 1969 where she continued her work as a nurse. She joined the Clay County health department as a field nurse then moved up to Director. After serving in that position for nearly 15 years she retired in 1995. After retirement she began volunteering at Flagler Hospital which continued nearly 22 years. She was a strong, independent, and feisty woman who had a great heart and would help anyone. A longtime member of Geneva Presbyterian Church, she served as a Deacon, Elder and a very active choir member, singing tenor with the men. Through the church she participated in “Helping Hands”, VBS, and filing back pack for under privileged children. She was very proud of her girls, and grandchildren and would brag that she had 13 great grandchildren. She enjoyed sewing by making dog beds for the humane society and bags for the women and children at the Betty Griffin House. She loved quilting, making certain all that of her offspring received one. She also made innumerable quilts for the veterans and hospice patients. She is survived by her daughters, Kathy Bagwell of Saint Augustine, Tracy Capua (Dom) of Saint Augustine and Lori Jones (Andy) of Christiana, TN; 5 grandchildren and 13 great grandchildren. Also many other family members and a great number of friends. She was preceded in death by her husband BT Enos, eldest daughter Vicki Lynn Sanford and sisters Ruth and Betty. A memorial service will be held 2:00 pm on Saturday, February 26, 2022 at Geneva Presbyterian Church with Rev. Joe Albright officiating. In lieu of flowers, donations in Barbara's memory can be made to: Community Hospice of NE Florida, 4266 Sunbeam Road, Jacksonville, Florida 32257. St. Johns Family Funeral Home is in charge of arrangements.

Barbara Ann Enos, age 90, of St. Augustine, Florida, passed away peacefully on February 5, 2022, at the Bailey Center for Caring in St. Augustine. She was born on July 5, 1931, to Theodore Wayne and Mildred (Smith) Fox in Oil City, Pennsylvania.... View Obituary & Service Information

The family of Barbara Ann Enos created this Life Tributes page to make it easy to share your memories.

Send flowers to the Enos family.