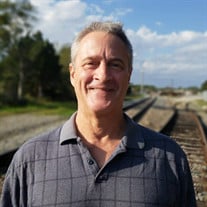 Andrew Tallman, 61, a 25 year resident of St. Augustine, Florida, passed away on May 15, 2021. He was born in Allentown, Pennsylvania where he resided throughout his childhood. He later moved to Atlanta, Georgia, and attended college and spent time with his beloved grandmother, "Toots", as well as his mother, Lee Ann Lehr. Later in life, he frequently visited Atlanta to spend time with his siblings, Audrey Grant and her husband George, their sons Robert and Jake, as well as his brother, AJ, his wife Connie, and their children Henry and Emily. After Atlanta, he moved back to Allentown to be closer to his father, Robert Tallman and his grandmother, "Tootie". That is where he met the future mother of his children, Kendra Carlson. They had two beautiful daughters, Hunter Kathryn, 25, and Harper Tracy, 23. He spent the years watching "the daughters" grow up. He loved going to the beach with his girls, and his adored dogs, Gremlin and Gizmo, "the boys". He enjoyed his favorite restaurants with his family. As long as there was pie, he was there! He will always be remembered for his kind, gentle spirit and for his endless generosity. He finished his career as a massage therapist at the Salt Spa here in St Augustine, where he helped so many people relieve their pain. He was also very active in the yoga community where fellow yogis said, “he was a friend to all and never had an ill word to say about anyone”. His unique sense of humor carried him through all he did. He will be sorely missed by so many. We love you, we love you, we love you we do Andrew.

Andrew Tallman, 61, a 25 year resident of St. Augustine, Florida, passed away on May 15, 2021. He was born in Allentown, Pennsylvania where he resided throughout his childhood. He later moved to Atlanta, Georgia, and attended college and... View Obituary & Service Information

The family of Andrew Hunter Tallman created this Life Tributes page to make it easy to share your memories.

Send flowers to the Tallman family.