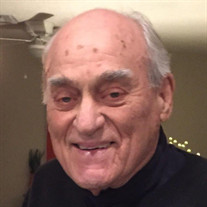 Albert Palmer Short, former employee of Potomac Electric Power Co. and resident of Falls Church Va. took his final bow in St Augustine Fl on 11/27/2021. He was born in Spring Lake, N.C. August 25th 1936 and spent his next ten years in the Charlotte N.C. area before living on various army posts, following the path of his dad’s military career. Known by both names, Palmer and Al; he loved sports, fishing, and the stage, but more than anything he loved his two sons, Jason and Josh. In 1951, his dad, a career soldier, was stationed at Ft. Monroe Va., a stone's throw from Newport News. Palmer, having taken up the sport only a month earlier, became the Newport News Junior Tennis Champion of 1951 on a borrowed racquet. In 1952, his dad, now stationed at FT Campbell Kentucky enrolled Palmer at South Christian High School. After joining the school’s baseball team, Palmer pitched every game including a no hitter. There were only eleven on the team and they just had a shirt for the uniform. In 1953, while playing shortstop for the Kings Mountain American Legion baseball team he got a hit off of a Gastonia pitcher who later played for the New York Yankees. In 1957 while serving in the army in Korea he was a member of the 1957 I Corp Division baseball championship team. He was the 1971 First Flight Club Golf Champion of Island View which was owned by his employer Pepco. In 1965-1966 he was a professional actor using the name Albert Palmer at Candlewood Theater in New Fairfield Conn. He called it way off Broadway. He left the professional theater wanting to have a family finally settling in Falls Church Va in 1973. 1980 found his lovely wife Claudia diagnosed with dementia never to recover. In 1985 with the permission of his two sons he joined an amateur theater group and was nominated best actor by Act (Alliance of Community Theater) for his performance of Atticus Finch in To Kill A Mockingbird. Because of health problems he retired to St Augustine Fl in 1991 where he immediately joined the St Johns County Men's Golf Assoc. He was club champion in 1997 and 2001. He was known by his golfing buddies for the many stories he would tell sometimes more than once. In 1998 he joined a play reading group Talent Ltd. where he wrote plays, acted, and directed. He sang in nursing homes at the urging of his friend JoAnne Englebert. He also sang in many fundraising shows at the First Congregation Sons of Israel with his dear friend Florence Abarbanel. He was a member of The Unitarian Universalist Fellowship of St Augustine where he was on the board of Trustees twice. As a member he produced and directed variety shows raising funds for the Fellowship. He was preceded in death by his parents John and Mary Viola, his wife, Claudia June, sons, Jason and Josh; brothers, Robert James and Edwin, and a sister, Jeannette Riester. He leaves behind his sister, Mary Lou (Merlu) Smith, his granddaughter, Lana Short and many nephews and nieces. A celebration of Palmer’s life with military honors will be held at 11 am on Saturday, December 18, 2021 at St. Johns Family Funeral Home. In lieu of flowers donations may be made to his son Josh's favorite charity: HAWKE Wildlife, 5285 St Ambrose Church Rd, Elkton, FL 32033. Those unable to attend can view the service live streamed at https://iframe.dacast.com/b/156599/c/549019 St. Johns Family Funeral Home is in care of the arrangements.

The family of Albert Palmer Short created this Life Tributes page to make it easy to share your memories.